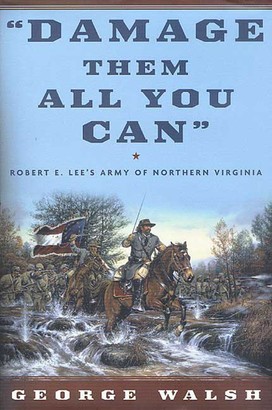 Damage Them All You Can

Beschreibung zu „Damage Them All You Can“

"Damage them all you can," the patrician Lee exhorts, and his Southern army, ragtag in uniform and elite in spirit, responds ferociously in one battle after another against their Northern enemies—from the Seven Days and the Valley Campaign through Chancellorsville and Gettysburg, from the Wilderness to Spotsylvania to the final siege of Richmond and Petersburg. Lee knows that the South's five-and-a-half million white population will be worn down in any protracted struggle by the North's twenty-two million. He is ever offensive-minded, ever seeking the victory that will destroy his enemies' will to fight. He uses his much shorter interior lines to rush troops to trouble spots by forced marches and by rail. His cavalry rides on raids around the entire union army. Lee divides his own force time and again, defying military custom by bluffing one wing of the enemy while striking furiously elsewhere.

But this book is more than military history. Walsh's narrative digs deeper, revealing the humanity of Lee and his lieutenants as never before—their nobility and their flaws, their chilling acceptance of death, their tender relations with wives and sweethearts in the midst of carnage.

Here we encounter in depth the men who still stir the imagination. The dutiful Robert E. Lee, haunted by his father's failures; stern and unbending Stonewall Jackson, cut down at the moment of his greatest triumph; stolid James Longstreet, who came to believe he was Lee's equal as a strategist, the enigmatic George Pickett.

These men and scores of others, enlisted men as well as officers, carry the ultimately tragic story of the Army of Northern Virginia forward with heart rending force and bloody impact.
As the war progresses we wonder above all else, had orders been strictly obeyed here or daylight lasted an extra hour there, what might have been. Only Appomattox brings an end to such speculation, when the tattered remnants of Lee's army, both the still living and the shadowy dead, stack their arms at last.

Ähnliche Titel wie „Damage Them All You Can“

They Shall Not Pass
Frank H. Simonds