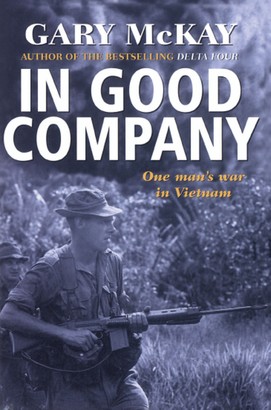 One man's war in Vietnam

On Friday 8th March 1968, 20-year-old Gary McKay lost the lottery. He was conscripted.
From a comfortable and carefree life of surfing and rugby football, he was drafted into the deadly serious preparation for war in the jungles of South Vietnam.
In Good Company is his story told in his own words. It begins with induction and selection for the officer academy for national servicemen at Scheyville, a six-month 'pressure cooker' course which produced second lieutenants ready to lead troops into action against the Viet Cong. It ends three and a half years later with a burst of NVA machine-gun fire during a battle among enemy-held bunkers in the hills of Nui Le.
Here is a grass-roots account of the blood, sweat and tears shared by a rifle platoon in jungle warfare, a straightforward story of the fears and the camaraderie which soldiers experience in combat.
Gary McKay fashioned this account from his experience in action, leading his platoon. The detail is provided from the 80 letters he wrote to his wife while he served. He wrote his story for the reader who wants to know what the soldier on the ground went through - in the fetid jungle, in battle. Anyone who wants to understand what service in South Vietnam meant to those who were there should read this book.
'Reading In Good Company leaves a vivid and disconcerting impression of how the Vietnam War smelt, felt and sounded... One of the most honest and affecting war memoirs which Australians have so far published.' - Mark Thomas, Canberra Times
'An enthralling, accurate account of infantry soldiering in the Vietnam era. Very readable; a must for those who have never experienced combat and a vivid reminder for all veterans.' - Major General M. P. Blake, AM, MC, former CO 5th Battalion RAR

The Corporal and the Celestials: In North China with the Royal Inniskilling Fusiliers, 1909-1912
Bill Jackson