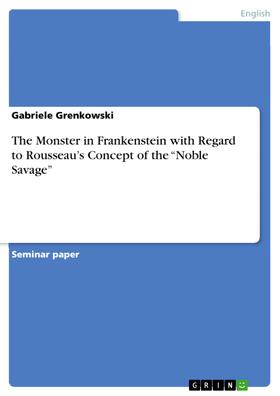 Seminar paper from the year 2011 in the subject English Language and Literature Studies - Literature, grade: 2,3, RWTH Aachen University (Institut für Anglistik), course: Proseminar Gothic Literature, language: English, abstract: This term paper deals with Jean-Jacques Rousseau’s concept of the “noble savage“ and the use of this concept by Mary Shelley as a main theme in her famous novel Frankenstein. In the first chapter of this paper, I will focus on the noble savage myth and explain what exactly is meant by the term. I will also explain Rousseau’s theories of a state of nature as found in his work A Discourse on the Origin of Inequality. Further, I will shortly confront Rousseau’s theories with a quite opposite world view, namely that offered by Thomas Hobbes in his works Leviathan and De Cive.

Women in the Victorian Era. Oscar Wilde’s comedies "Lady Windermere’s Fan", "A Woman of no Importance" and "An ideal Husband"
Marie-Christin Grigoleit