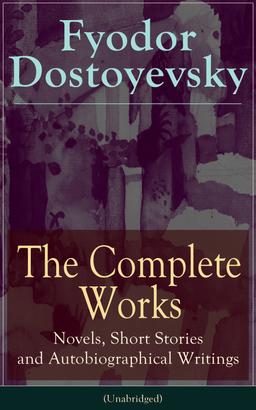 The Entire Opus of the Great Russian Novelist, Journalist and Philosopher, including a Biography of the Author, Crime and Punishment, The Idiot, Notes from the Underground...

This carefully crafted ebook: "The Complete Works of Fyodor Dostoyevsky: Novels, Short Stories, Memoirs and Letters (Unabridged)" is formatted for your eReader with a functional and detailed table of contents. Fyodor Dostoyevsky (1821–1881) was a Russian novelist, short story writer, essayist, journalist and philosopher. His literary works explore human psychology in the troubled political, social, and spiritual atmosphere of 19th-century Russia. Many of his works contain a strong emphasis on Christianity, and its message of absolute love, forgiveness and charity, explored within the realm of the individual, confronted with all of life's hardships and beauty. His major works include Crime and Punishment, The Idiot, Demons and The Brothers Karamazov. Many literary critics rate him as one of the greatest and most prominent psychologists in world literature. His novella Notes from Underground is considered to be one of the first works of existentialist literature. NOVELS: Netochka Nezvanova The Village of Stepanchikovo The House of the Dead Crime and Punishment The Idiot The Possessed (Demons) The Insulted and the Injured The Raw Youth (The Adolescent) The Brothers Karamazov NOVELLAS: Poor Folk The Double The Landlady Uncle's Dream Notes from Underground The Gambler The Permanent Husband SHORT STORIES: The Grand Inquisitor (Chapter from The Brothers Karamazov) Mr. Prohartchin A Novel in Nine Letters Another Man's Wife or, The Husband under the Bed A Faint Heart Polzunkov The Honest Thief The Christmas Tree and The Wedding White Nights A Little Hero An Unpleasant Predicament (A Nasty Story) The Crocodile Bobok The Heavenly Christmas Tree A Gentle Spirit The Peasant Marey The Dream of a Ridiculous Man LETTERS: Letters of Fyodor Michailovitch Dostoyevsky to his Family and Friends BIOGRAPHY: Fyodor Dostoyevsky, A Study by Aimée Dostoyevsky