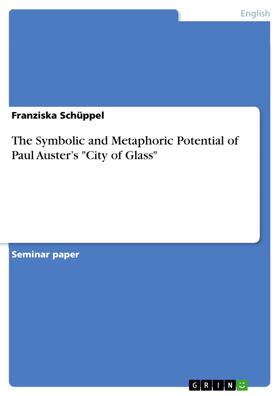 Seminar paper from the year 2008 in the subject American Studies - Literature, grade: 1,3, University of Leipzig, language: English, abstract: Lewis Jones once wrote in the Telegraph about Paul Auster that “his novels are labyrinths of enigmas, mysteries and riddles, thrillers with no endings, detective stories as told by Samuel Beckett, their premises endlessly shifting, in which the only knowledge is that nothing is, or can be, known.”. These qualities are also represented in his New York Trilogy published in 1987, that consists of the three detective stories City of Glass, Ghosts, and The Locked Room, which are set in New York. All of them deal with the nature of identity and attach value to these mysteries and riddles typical of Paul Auster, for example by using symbols and metaphors# to cause certain reactions in the reader. Especially the postmodern novel City of Glass from 1985 makes use of numerous symbols and metaphors that can be found throughout the whole novel. In this way, many passages or even single sentences can be interpreted differently and consequently it is sometimes difficult for the reader not to be confused. By using the single symbols and metaphors of the title, of glass as symbol of pairs and look-alikes, the crisis of identity, and the Tower of Babel in his novel City of Glass, Paul Auster influences the reader and causes different effects, such as catching his interest, confusing him, or giving him a reason for thinking. In the following I am going to analyze the single symbols and metaphors and try to interpret the effects on the reader and the author‘s intentions.