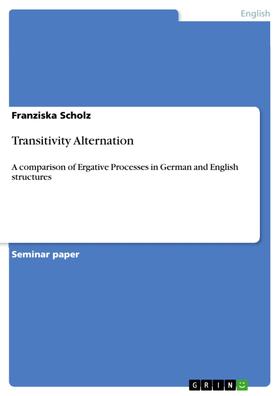 A comparison of Ergative Processes in German and English structures

Seminar paper from the year 2009 in the subject English Language and Literature Studies - Linguistics, grade: 1,0, University of Cologne (Englisches Seminar), course: Syntactic structures of English, language: English, abstract: The English grammar has many similarities with the grammar of German, since both have their roots in the Germanic languages. Therefore English and German share lexical and structural, but also semantic properties. In order to deepen one’s understanding of these properties this paper will deal with differences and similarities of the English and German verb system.
Transitivity alternation is based on the syntactic distinction of verbs that are divided into transtive and intransitive verbs. This paper deals with both verb categories, taking into account semantic matters as well. In English and in German a verb can express the way in which an action affects its object, which is part of the so-called ergative model. This model shall be introduced in Chapter 2 with examples of the English language. After the introduction to the usage of ergative verbs a comparison of English and German structures follows in Chapter 3. Mistakes of translation are often due to structural and semantic differences within the ergative model. English and German verbs do not always provide the same variety of possibilities to express an action, therefore it shall be shown in Chapter 3.1 in which language the verb system is more flexible in regards to ergative processes. Chapter 3.2 deals with morphosyntactic differences of German and English within the ergative model. As the German structure shows similarities as well as differences to the English verbs, an attempt is made in Chapter 4 to discover potential semantic distinctions within those German verbs that either differ or resemble the English structure.
The aim of this paper is to bring out a comparison of the English and German language that gives an insight into their verb systems in regards to syntactic as well as semantic properties.

English and German. A Comparison of Phonological and Inflectional Properties
Hülya Atasoyi