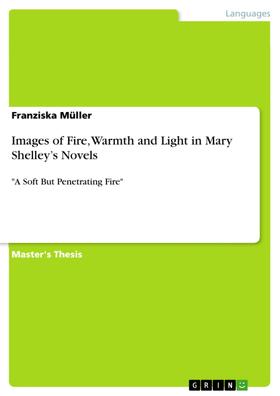 Images of Fire, Warmth and Light in Mary Shelley’s Novels

"A Soft But Penetrating Fire"

Master's Thesis from the year 2015 in the subject English - Literature, Works, grade: 1,0, , language: English, abstract: When Mary Shelley published her famous Frankenstein-novel in 1818, she hinted at a theme in the subtitle “The Modern Prometheus” that would run like a thread through all of her later novels. While much has been written about the Promethean element in Frankenstein – Dougherty focuses on the moral issues (Dougherty 111), Franklin reads the novel as a critique of the concepts of democracy in Prometheus and Frankenstein (Franklin 42), and Cantor focuses on identifying the Promethean figure – very little has been written on the element of fire in the novel.

This lack of interest in the fire imagery in research is interesting, because fire plays a rather dominant role in both the Promethean Myth and the novel itself. After all, it is fire in the form of a “spark of being” that gives life to the monster. Although Watson rightly states that “‘the Modern Prometheus’ concerns two legends of Prometheus – that he stole fire from heaven, and that he made a man from clay and used fire to give it life” (Watson 247), only Franklin grants the issue of fire more than just a few words. She then also fails to go into more detail after declaring that the monster is not given fire, but finds it himself (Franklin 42). Interestingly, unlike research, the film industry has spotted the importance of the fire imagery. It plays a dominant role in many adaptations of the novel – recall James Whale’s 1931 film version, where the villagers try to burn the monster in the windmill, or Kenneth Branagh’s 1994 movie, where Frankenstein creates two monsters and the former Elizabeth commits suicide by setting herself on fire.
The impact of the fire imagery in Shelley’s work becomes even more apparent in looking at her other novels. The symbolic use of fire is not restricted to Frankenstein and the Promethean theme, but is a general stylistic feature distinct of Shelley’s writing. In addition to Frankenstein, two other of Shelley’s novels will be examined in order to prove this point. Dougherty argues that fire mainly serves the purpose of providing heat and light (Dougherty 18). The notion ‘fire’ will thus not be restricted to the literal sense, but will also comprise light and warmth. The symbolism of the opposite forces – darkness, cold, and water – will also be considered.