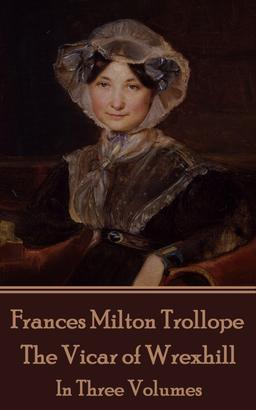 Frances Milton Trollope was born on March 10th, 1779 at Stapleton in Bristol. The mother of the world famed Anthony Trollope, and his brother Thomas Adolphus Trollope, she was a late entrant to the ranks of authors being fifty when she embarked upon this new career, and even then more by necessity for income than by design. Her first book, in 1832, Domestic Manners of the Americans, gained her immediate notice. Although it was a one sided view of the failings of Americans, it was also witty and acerbic. But much of the attention she received was for her strong novels of social protest. Jonathan Jefferson Whitlaw, published in 1836, was the first anti-slavery novel, and was a great influence on the American writer Harriet Beecher Stowe and her more famous Uncle Tom's Cabin in 1852. Michael Armstrong: Factory Boy began publication in 1840 and was the first industrial novel to be published in Britain. These were followed by three volumes of The Vicar of Wrexhill, which examined the corruption in the Church of England and evangelical circles. However her greatest work is more often considered to be the Widow Barnaby trilogy (published between 1839–1843). In later years Frances Milton Trollope continued to write novels and books on wide, varied and miscellaneous subjects, writing in all in excess of a quite incredible 100 volumes. Frances Milton Trollope died on October 6th, 1863.

The Odyssey of Homer, Translated by George Chapman
Homer