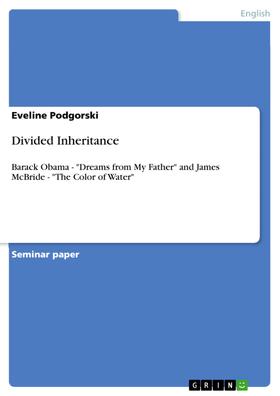 Seminar paper from the year 2007 in the subject English Language and Literature Studies - Literature, grade: 2,0, University of Paderborn, course: Contemporary American Memoirs, 14 entries in the bibliography, language: English, abstract: Besides the novel and the autobiography, the memoir has become very popular, especially in the United States. What makes a memoir special? What are the key aspects the writer of a memoir has to observe? And what is it that differentiates the memoir from a simple novel or an autobiography? In our seminar “Contemporary American Novels”, we dealt with some recent outcomes that talk about different subjects – growing up with a divided inheritance, dealing with a rape and overcoming the death of a beloved person. In this term paper, I will take a closer look at the first subject, namely growing up with a divided inheritance, and memoir we read – “The Color of Water” by James McBride. To analyse several different issues that are raised in this book, I will compare it to another memoir, which also deals with the subject of growing up as a part of two different cultures. “Dreams from My Father” was written by the senator-elect from Illinois Barack Obama in the year 1995 and describes his life as the son of a white mother and a black father – just as James McBride. Firstly, I will discuss the theoretical conditions of the memoir as a genre on the basis of the three questions given above. Afterwards, I will go over to the two memoirs that shall be analysed. Since both authors grew up in almost the same time of racial discrimination a short introduction on the historical background of the two memoirs will be given. This is followed by a detailed analysis on different issues that are treated in the two memoirs: The relationship between Barack and his father compared to the relationship of James and his mother, as well as how the subjects of race and identity as they are experienced by the two authors. I will conclude this thesis in the final chapter.

Language at War. A Critical Discourse Analysis by Speeches of Bush and Obama on War and Terrorism
Martin Lausten