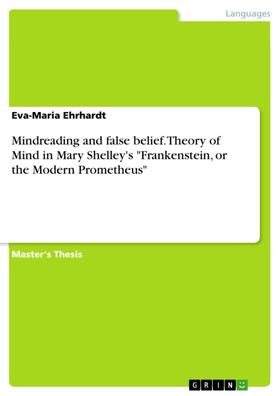 Mindreading and false belief. Theory of Mind in Mary Shelley's "Frankenstein, or the Modern Prometheus"

Master's Thesis from the year 2015 in the subject English - Literature, Works, grade: 1,0, Johannes Gutenberg University Mainz, language: English, abstract: Every reader who has spent some time with an infant has experienced the following scenario at least once: you are playing hide-and-seek with the child and, out of the blue, the child covers her eyes with her hands, believing to have found the most amazing hiding place. For the child, it is clear: he or she cannot see the adult, thus, the adult cannot see him/ her. In fact, the child is probably sitting in the middle of the room, without any object covering him/ her (except for the hands), and with the adult standing right in front of the child. This example is the perfect introduction to the topic of the present master thesis. The child is not yet able to understand that the adult is capable of seeing, believing or knowing something other than that which the child can. Or, in other words, the child does not understand that the adult has another mental state than its own. Thus, the child does not have a Theory of Mind, yet.
This master thesis deals with instances of Theory of Mind (such as the reading of minds, prediction of future actions, false and true beliefs) in Mary Shelley's famous work Frankenstein, or the Modern Prometheus (1818). The term Theory of mind (abbreviated as ToM) was introduced in 1978 by psychologists David Premack and Guy Woodruff in their famous paper “Does the Chimpanzee have a Theory of Mind?”. ToM denotes the ability of an individual to have a certain self-awareness, that is to be aware of one's own mental state, one's own beliefs (also false beliefs) but furthermore, the individual has to be able to attribute a mental state not only to themselves but to another individual as well. Given these conditions, the literature would suggest that this person has a Theory of Mind. I will discuss Theory of Mind in more detail in the second chapter. Besides Theory of Mind, there are also other terms that can be found in the literature, such as folk psychology, mindreading, mentalizing or even social cognition. [...]

“And it’s all there” – Intertextual Structures, Themes, and Characters in Stephenie Meyer’s "Twilight" Series
Kathrin Fäller