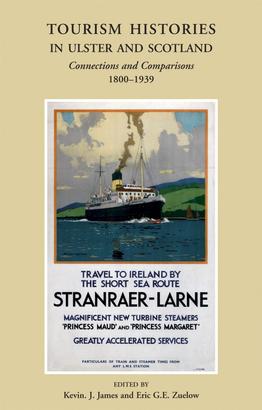 Tourism Histories in Ulster and Scotland

This collection of essays brings together scholars of Irish and Scottish tourism history to chart a new comparative direction in research. The long-standing cultural exchanges, economic linkages, and flows of people between Ulster and Scotland included, from the nineteenth century, extensive recreational travel across the North Channel. At the same time, cities, resorts, and tourist sites in each place vied for the tourist’s pound in the lucrative English market. Ulster and Scotland boasted a number of comparable sites – indeed Staffa and the Giant’s Causeway were often seen as part of a single ‘site’, and Co. Donegal was promoted to tourists as the ‘Irish Highlands’ – while numerous resort towns catered to heavy cross-channel traffic between the two places. Indeed, for some, Ulster and Scotland constituted a single regional tourist economy; for others, the two locations were fierce competitors.

This collection includes overviews of each tourism sector, specific case studies that suggest the value of comparison, and several studies that examine institutional and even infrastructural linkages. Through these combined approaches, it shows that tracing the historical development of, and connections between, tourism in Ulster and Scotland yields important insights into the character of tourist development, and suggests the value of adopting a new spatial framework for exploring tourism history.

The Role of Denomination in the Northern Ireland Conflict
Berina Hodzic