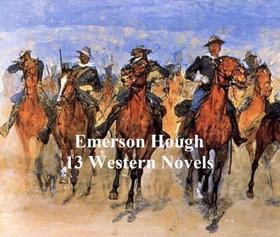 This book-collection file includes: 54-40 of Fight, The Covered Wagon, Girl at the Halfway House, Heart's Desire, The Law of the land, Maw's Vacation, The Mississippi bubble, The Purchase Price, The Sagebrusher, The Story of the Outlaw, The Way of a Man, The Young Alaskans, and The Young Alaskans on the Missouri. According to Wikipedia: "Emerson Hough (1857-1923) was an American author, best known for writing western stories. Hough was born in Newton, Iowa, and graduated from the University of Iowa with a law degree. He moved to White Oaks, New Mexico, and practiced law there but eventually turned to literary work by taking camping trips and writing about them for publication. He is best known as a novelist, writing The Mississippi Bubble as well as The Covered Wagon, about Oregon Trail pioneers, which later became successful as a movie, running 59 weeks at the Criterion Theater in New York City, passing the record set by Birth of a Nation. Other notable works included Story of the Cowboy, Way of the West, Singing Mouse Stories, and Passing of the Frontier, and writing the "Out-of-Doors" column for the Saturday Evening Post."