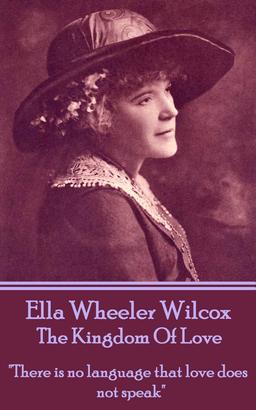 The Kingdom Of Love

"There is no language that love does not speak"

Beschreibung zu „The Kingdom Of Love“

Born on November 5th 1850 in Johnstown, Wisconsin, Ella Wheeler was the youngest of four children. She began to write as a child and by the time she graduated was already well known as a poet throughout Wisconsin. Regarded more as a popular poet than a literary poet her most famous work ‘Solitude’ reflects on a train journey she made where giving comfort to a distressed fellow traveller she wrote how the others grief imposed itself for a time on her ‘Laugh and the world laughs with you, Weep and you weep alone’. It was published in 1883 and was immensely popular. The following year, 1884, she married Robert Wilcox. They lived for a time in New York before moving to Connecticut. Their only child, a son, died shortly after birth. Here we publish one of her many poetry books, The Kingdom Of Love, that so endeared her to her audience. Ella died of breast cancer on October 30th, 1919.