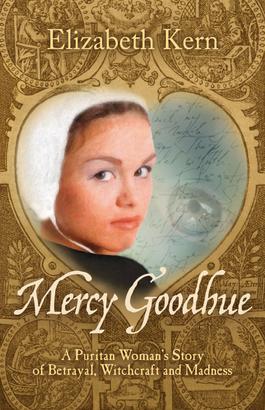 A Puritan Woman's Story of Betrayal, Witchcraft and Madness

A PURITAN WOMAN'S STORY OF BETRAYAL, WITCHCRAFT AND MADNESS

Imagine a time when nights were darker than dark, when God was a harsh judge, when witches were believed to be real, when medicine was mixed with superstition and magic, when women were expected to “be fruitful and multiply” from marriage until menopause.

Imagine a time when a large picture of an eye was tacked to the front of the pulpit in the Puritan meetinghouse, reminding men, women, and children that God was always watching.

Welcome to Massachusetts in the 17th Century.

MERCY GOODHUE is the story of a Puritan woman who is driven to the brink of madness by the harsh religious beliefs of her time. It is also the story of a tenacious midwife and herbalist, Goody Hammer, who never gives up on Mercy, and saves her from committing an unthinkable crime.

The story begins in 1630 when Mercy, a joyous young girl entering womanhood, sails with her family upon the Winthrop Fleet to Massachusetts. Mercy finds love with the handsome Joshua, but then a painful betrayal forces her to keep a secret that threatens to destroy her earthly life and her hope for salvation.

MERCY GOODHUE brings together a colorful array of historical characters (the pioneer, John Winthrop, the “heretic” Anne Hutchinson, the zealot, John Cotton) and fictional ones like the mysterious Goody Hammer who “meddles in phisicks and oyles.” The story is loosely based upon an excerpt taken from the diary of John Winthrop, the first governor of the Massachusetts Bay Company, who in 1637 wrote about such a woman, Anne Needham Hett.

A Flower for the Queen
Caroline Vermalle

The Ulster Plantation in the Counties of Armagh and Cavan 1608-1641
R. J Hunter

The Secret of the Ninth Stone
Kylie Fitzpatrick