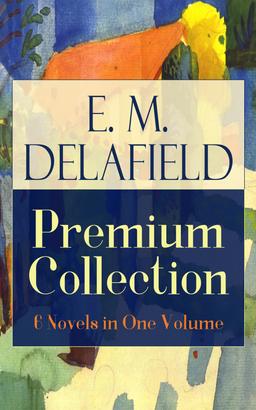 Zella Sees Herself, The War Workers, Consequences, Tension, The Heel of Achilles & Humbug by the Prolific Author of The Diary of a Provincial Lady, Thank Heaven Fasting and The Way Things Are

This carefully crafted ebook: "E. M. Delafield Premium Collection: 6 Novels in One Volume" is formatted for your eReader with a functional and detailed table of contents. "Zella Sees Herself" (1915) - Zella is a beautiful orphan who must come to terms with her mother's death in a largely hostile world. The Novel is largely autobiographical and the first written work of E. M. Delafield. "The War-Workers" (1918) - The travails of working in a Supply Depot under the tyrannical control of Charmain Vivian, who meets her match in a newly arrived clergyman's daughter Grace Jones. "Consequences" (1919) - A young woman entering a convent. Its heroine, Alex Clare, refuses to marry the only young man to make her an offer of marriage, and, finding herself regarded as a failure by society, must resort to convent life. "Tension" (1920) - Pauline Marchrose is a successful candidate, a woman claiming to be 28 but probably in her early thirties, when women are only beginning to fight for their rights and for equal opportunities. "The Heel of Achilles" (1921) - A middle-class young woman Lydia Raymond who intends to marry "above her" during the first world war in England while her daughter Jane rebels against her. "Humbug: A Study in Education" (1922) - The protagonist Lilly is a charming character who in spite of believing in the goodness of things is bogged down by her family and society to conform. E. M. Delafield (1890-1943) was a prolific English author. She is best known for her largely autobiographical works like Zella Sees Herself, The Provincial Lady Series etc. which look at the lives of upper-middle class Englishwomen.

The Diary of a Provincial Lady (Unabridged Edition With Original Illustrations): Humorous Classic From the Renowned Author of Thank Heaven Fasting, Faster! Faster! & The Way Things Are
E. M. Delafield

A Room of One's Own
Virginia Woolf