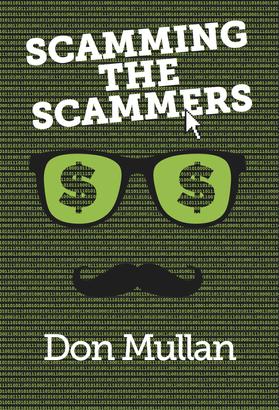 How many emails have you deleted recently offering you inherited millions from a mystery relative, or the uncollected winnings from an unheard of lottery? Rather than press delete, Don Mullan decided to take the Scammers on at their own game...

As a result, welcome to the fantasy world of the saintly Nod and Catherine Nallum and their associates, Bart Ahern, Biggles and Fr Jonathan Ross; of Pastor Patricio, Supreme Head of the Church of Serendipity and his Parisian friends, and of the 3rd Marquess of Miserly-Scholes of Stoke-on-Trent and his PA/lover, Lady Sarah Macbeth...

As well as highlighting a very serious issue a recent study showed one million residents in the UK have been defrauded by internet scams Don Mullan begins his quest to scam the scammers, with very memorable results.

Don Mullan is the author of two best-selling investigative books:
Eyewitness Bloody Sunday (Wolfhound Press, 1997 and Merlin
Publishing, 2002); and The Dublin and Monaghan Bombings (Wolfhound
Press, 2000). He has also written/edited ten books on
religious topics, including: A Gift of Roses: Memories of the Visit
to Ireland of St Thérèse (Merlin Publishing 2001); and eight Little
Books published in both Ireland and the USA by Columba Press
and Pauline Books and Media.
Mullan has been published in all Irish national newspapers,
as well as newspapers in the UK, Italy, France, USA and Brazil.
His first book, Eyewitness Bloody Sunday, was a major catalyst in
the establishment in 1998 of a new Bloody Sunday Public Tribunal
of Inquiry, which is the most expensive tribunal in British
legal history. The book was also the inspiration for the awardwinning
movie, Bloody Sunday (winner at the Sundance and
Berlin Film Festivals), which he co-produced with British filmmakers,
Mark Redhead and Paul Greengrass. He also co-produced
with Greengrass the 2004 award-winning movie, Omagh
(Winner of the San Sebastian and Toronto Film Festivals). He
is currently co-producing a BBC film about Truth and Reconciliation.