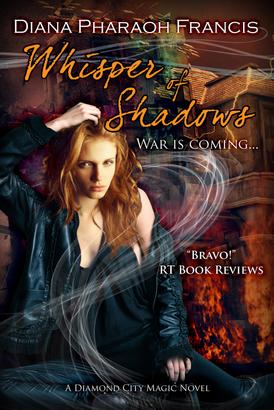 When the FBI uses an anti-magic law to arrest and torture Riley's boyfriend, they have no idea what hell they are about to unleash. If Riley can't rescue Clay before he breaks, the result will be a disaster of epic proportions.

With time running out, Riley and her family must rely on two people more likely to stab them in the back than actually help. And, even if Riley manages the rescue, she's still got to deal with two kidnappings and the return of her dad from the dead--the same dad who'd been willing to see her dead to protect his secrets.

What's a girl to do? Kick ass, take names, and protect those she cares about at all costs.

"The characters and the world building are fantastic." --Book Junkiez on Edge of Dreams

"A kickass thrill ride with magic, sex, guns, and mystery."--John Hartness, Bestselling Author of The Black Knight Chronicles on Trace of Magic

Diana Pharaoh Francis is the acclaimed author of a dozen novels of fantasy and urban fantasy. Her books have been nominated for the Mary Roberts Rinehart Award and RT's Best Urban Fantasy. Whisper of Shadows is the third book in her exciting new urban fantasy series--The Diamond City Magic Novels.

Diana Pharaoh Francis has published Trace of Magic, The Horngate Witches series, The Crosspointe Chronicles, and The Path trilogy. She holds a Ph.D. in Victorian literature and literary theory, and an MA in fiction writing. She's been teaching for more than fifteen years, and now writes full time as well as teaching for the M.F.A. in Creative Writing program at Western Colorado State University.