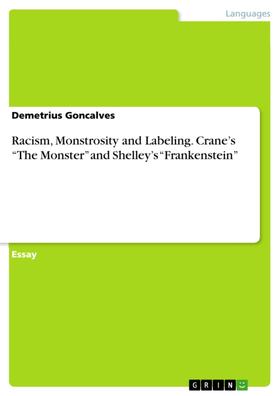 Racism, Monstrosity and Labeling. Crane’s “The Monster” and Shelley’s “Frankenstein”

Essay from the year 2015 in the subject English - Literature, Works, grade: 10.0, , course: English 102, language: English, abstract: This paper will explore Stephen Crane’s 1898 novella “The Monster” in a critical race approach. Inside this theme, there will be discussions based on alienation, class distinctions, race relations, racism, labeling, and especially the mob violence, a movement very popular among the population of the 1890s – a period of intense and horrifying racial violence, where many laws were created to prevent African Americans from integrating in society, the appearance of race labeling and the lynch. Also, it will incorporate passages from Mary Shelley’s “Frankenstein”, trying to compare and contrast the role that alienation plays in both stories. I will also try to discuss criminality on my research, applying Becker’s (1963) labeling theory on all examples provided.