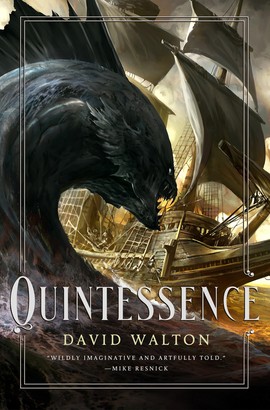 Imagine an Age of Exploration full of alchemy, human dissection, sea monsters, betrayal, torture, religious controversy, and magic. In Europe, the magic is thin, but at the edge of the world, where the stars reach down close to the Earth, wonders abound. This drives the bravest explorers to the alluring Western Ocean. Christopher Sinclair is an alchemist who cares only about one thing: quintessence, a substance he believes will grant magical powers and immortality. And he has a ship.

Fleeing an inquisition, physician Stephen Parris follows Sinclair to an island that perches upon the farthest horizon, bringing his daughter Catherine with him. The island teems with fantastical animals and alluring mysteries...and may even harbor the most coveted secret of all ... in this novel by David Walton.

Things Are Not Always As They Seem
Barb McIntyre

The Edge of Time
Dan Feltham

Blood of the Realm
Lee Sanders

The Double Life of the Bathing Beauty Killer
Theresa Finch