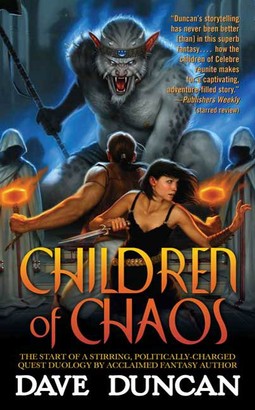 On a dodecahedral world in thrall to the tyrannical, war-obsessed Hrag dynasty, no one could stop the Bloodlord from sending troops over the Edge to Florengia, invading its major cities, and offering them a choice between strict colonial rule and immediate and total destruction. When the doge of Celebre was faced with this ultimatum, he gave his children up as hostages so that the rest of Celebre might live. Thus the four young Florengians were taken from their homes and scattered across the Vigaelian face.

Fifteen years later, and you'd never guess that they're siblings. Fabia was adopted by a wealthy landowner and spoiled rotten, Orlando desperately yearns to overcome his Florengian blood and fight for the Vigaelian army, Benard is a flighty but talented artist, and Wisdom has it that Dantio, the eldest, died fighting his captors. But when Celebre suddenly takes on crucial political significance, one of the siblings must return home to serve as Celebre's puppet ruler, and the others must be eliminated so that there are no rival claimants to the throne.

It's going to be tough enough finding one another, let alone deciding whether enough kinship remains after fifteen years apart that the siblings will care to help each other out of their respective predicaments. If they're feeling particularly altruistic, the Celebres might even take on the bonus round: trying to save Dodec from the culture of death and war imposed on it by its evil warlords.

One thing's for certain: the Celebre children are going to have a lot of adjusting to do . . .

Children of Chaos is the start of a stirring, politically-charged quest duology by acclaimed fantasy author Dave Duncan.

Originally from Scotland, Dave Duncan has lived all his adult life in western Canada, having enjoyed a long career as a petroleum geologist before taking up writing. Since discovering that inventing imaginary worlds is more satisfying than poking holes in the real one, he has published more than forty novels, mostly in the fantasy genre, but also in young adult, science fiction, and historical. His books include Speak to the Devil and When the Saints. He has at times written as Sarah B. Franklin and Ken Hood. He and his wife, Janet, have one son and two daughters.

Seekers of the Chalice
Brian Cullen