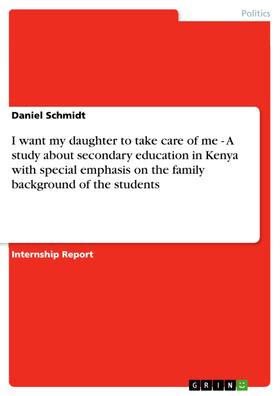 Internship Report from the year 2007 in the subject Politics - International Politics - Region: Africa, grade: 1,0, University of Twente (Political Institute ), 86 entries in the bibliography, language: English, abstract: […] In Kenya secondary education is still very problematic, as it is cost school fees and this money is often too much for the low-earning families. Therefore only 30% of the eligible studets are going to secondary schools in Kenya (Aduda, Daily Nation, 14.06.2007). […]During a three-month stay in Kenya I had the chance to conduct an interview with parents, who send their girls to a secondary school in Mabungo, a village next to the city of Ukunda. My aim was to find out, why parents decided to send the girls to school and what they expect from those investments in the future.
Four leading hypotheses were established before the interviews took place, namely:
1. Families that have the choice of sending boys or girls to school prefer the boys. […]
2. Only parents who are educated themselves also care about education for their children.
3. The work that has to be done around the house prevents parents from sending their children to school, since their working skills are needed in order to feed the family
4. Parents see the investing in their children as a step into a secure future for themselves, which is often the main reason why they send their children to school.
In order to find out whether those hypotheses apply, the interview was constructed around those questions.[…]
The set-up of the paper will reconstruct the approach, which was taken in order to find answers to the hypotheses. In the first part the methodology, which was chosen in order to construct and implement the interview, will be described. After this the answers will be described and it will be shown that especially the fourth hypothesis is true and of crucial importance for parents that send their girls to secondary schools. In the following section it will be checked if the results of the interview are in line with other research practices or if the results differ from what other scientists found out. The special circumstances, which maybe lead to differences, will be described in the next section, and therefore it is of importance to closer, describe the area of the coast in Kenya and the city of Ukunda.
The fifth section will take one finding of the paper under closer investigation. Most parents answered that they send their children to school so that the children can ensure a better future for themselves and for the whole family. It seems like the education of the children can serve as a kind of “retirement fund”. […]

Challenges faced by youth engaging in agriculture. A study of peri-urban Kiambu in Kenya
Michael Sitawa

From Platberg to Kilimanjaro
Harry Loots