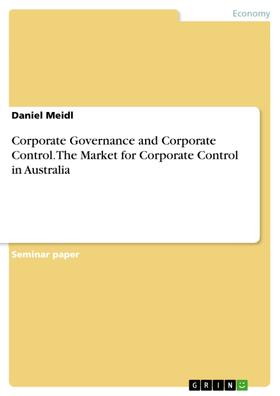 Seminar paper from the year 2014 in the subject Business economics - Business Management, Corporate Governance, grade: 1,7, Munich Business School University of Applied Sciences, language: English, abstract: Particularly in the last decades the awareness of companies themselves and the public for good corporate governance increased dramatically. “Corporate governance is set to be the primary focus for the 21st” century. Most of the advanced economies have released new corporate governance rules and codes or company laws, especially as a result of the financial crisis in 2007 and the breakdown of several big companies worldwide. In Australia attention to corporate governance has grown after the „major corporate collapses and scandals of 2001 and 2002“, which included „five publicly traded (…) companies (...) [such as the] telecom company (One.Tel)“.

One.Tel ran out of money and collapsed in 2001. The company could not be revived, all assets were sold and the workers laid off. It has once been the fourth largest telecom company in Australia. The collapse of the Australian company is „associated with serious deficiencies in its corporate governance, including weaknesses in internal control, (…) management communication with the board, and poor executive pay-to-performance link.“