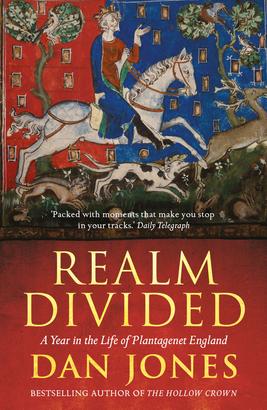 A Year in the Life of Plantagenet England

1215 – the penultimate year of the reign of a king with the worst reputation of any in our history – saw England engulfed by crisis.

Weakened by the loss of Normandy, King John faced insurrection by his disgruntled barons. With the assistance of the Archbishop of Canterbury, they drew up a list of their demands. In June, in a quiet Thames-side water-meadow, John attached his regal seal – under oath – to a charter that set limits on regal power. In return, the barons renewed their vows of fealty. Groundbreaking though 'Magna Carta' was, it had scant immediate impact as England descended into civil war that would still be raging when John died the following year.

Dan Jones's vivid account of the vicissitudes of feudal power politics and the workings of 13th-century government is interwoven with a exploration of the lives of ordinary people: how and where they worked, what they wore, what they ate, and what role the Church played in their lives.

A Short History of Britain in Infographics
Ray Hamilton

The Story of England
Samuel Harding

Bleeding Armenia: Its History and Horrors under the Curse of Islam
A. W. Williams

A History of the Peninsula War II
Charles Oman

A General History of the Pyrates: From their firstd of Providence to the Present time
Daniel Defoe

The History and Romance of Crime, Millbank Penitentiary
Arthur Griffiths

Pedal and Path - Across the Continent Aweel and Afoot
George B. Thayer