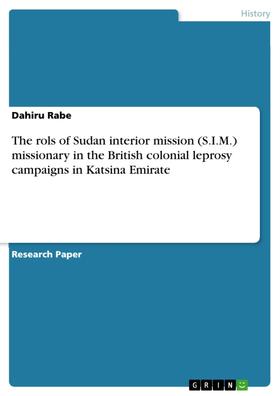 Research Paper (postgraduate) from the year 2011 in the subject History - Africa, , course: HISTORY, language: English, abstract: ABSTRACT
Throughout colonial period the history of Nigeria had been influenced by European activities and their impact on the area. One important institution that played a very vital role in the colonial activities was the Christian missionary group. Although at the initial stage their importance was not given required attention because of some obvious political reasons, later, their services were recognized and used by the colonial government to address the social challenges prevalent in the society such as leprosy scourge. This paper discusses the attempts made by the Christian missionary in the effort to convert the menace of one of the dangerous diseases in Nigeria during the colonial period. This was achieved by allowing the mission groups to enter some areas that were hitherto restricted. On the other hand, the mission used that opportunity to achieve the main aim of their coming to northern Nigeria. Finally, the paper concludes the discourse by appreciating the genuine efforts of the mission via-a-vis colonial political maneuvers.