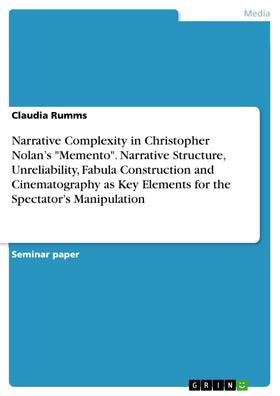 Seminar paper from the year 2015 in the subject Film Science, grade: 1,3, University of Münster, language: English, abstract: In my term paper, I will examine the narrative structure in “Memento“ which switches between chronological narration and reversed temporality. With respect to this unique narrative structure, I will take a closer look at the black-and-white and colour sequences, the opening sequence and the outstanding and resolvent scene 22/A, especially regarding the cinematography used. In the further course of my work, you will learn of the essential role of the unreliable narrator regarding my thesis and finally what impact the fabula construction in “Memento” has on his viewers.

„Causes and their effects are basic to narrative, but they take place in time“. This quotation from Bordwell’s and Thompson’s work Film Art, an Introduction does not only show a fundamental principle of narration but furthermore depicts a possibility to manipulate the spectator’s understanding of a story. Christopher Nolan’s “Memento” is one example of what a complex narration can be.

The film shows two separate stories of Leonard, an ex-insurance investigator who suffers anterograde amnesia and attempts to find the murderer of his wife, which is the last thing he can remember. On the one hand there is a forward moving storyline, the black-and-white scenes while the other one, the colour sequences, tells the story backwards. Although the story behind the film is rather simple, the narrative structure is extremely complex and clever, which demands constant attention from its spectators.

This term paper will deal with the methods used in “Memento” which mislead the audience’s understanding of the story. My thesis is therefore: Narrative complexity in Christopher Nolan’s “Memento” – Narrative structure, Narrator’s unreliability, fabula construction and cinematography as key elements for the spectator’s manipulation.

Apart from the film “Memento”, the central literature I will work with is the essay by Stefano Ghislotti “Narrative Comprehension Made Difficult: Film, Form and Mnemonic Devices in ‘Memento’”, the documentary “Anatomy of a Scene” about the making of “Memento”, a text by Andy Klein named "Everything You Wanted to Know about ‘Memento’” and different filmic narrativity by Jakob Lothe, David Herman and Edward Branigan. In addition to that, there is a self-generated sequence analysis attached to the term paper in order to have an overall view of the scenes I take a closer look at.