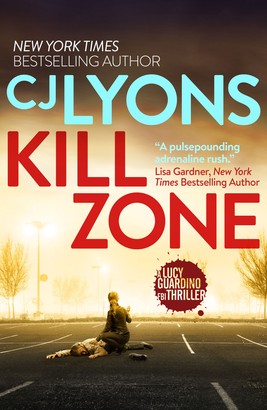 The brutal murder of a teenage girl…

The violence is the worst Lucy Guardino has ever seen, the stakes are higher than ever… and things get personal.

It’s a vicious crime: the brutal killing of a teenaged girl. When detectives call FBI Agent Lucy Guardino to the scene, their focus is on who and why?

Was it the girl’s Afghan father? Her Jewish boyfriend? Someone from Afghanistan settling an old grudge? Or one of the drug cartels the father helped bring down seeking revenge?

Meanwhile former Marine Sergeant Andre Stone has been home a month, but has yet to leave the safe haven of his grandmother’s house. Andre’s disfiguring physical scars are the least of his worries. The emotional wounds of seeing his men massacred in a raid gone wrong have left him numb. All he can think about is revenge on Rashid Raziq, the man behind the raid. When Andre is offered a chance at vengeance, the only question is: How far will he go to get it?

As Lucy’s hometown is engulfed in flames, a violent narco-terrorist turns the city into a kill zone…In the dark of night Lucy and Andre both learn that secrets hide in shadows. This gripping thriller from CJ Lyons is perfect for readers of Lee Child, Jeffrey Deaver and Lisa Gardner. Filled with heart-stopping suspense, it is a crime thriller that won’t let go.

Watch out for more Lucy Guardino

Lucy Guardino will do whatever it takes to stop violent predators

What people are saying about Kill Zone and CJ Lyons

‘In true CJ Lyons fashion, this book pulls no punches. It's an in-your-face, no-holds-barred story depicting the cruel world of murder and drugs. As with all of her other books, CJ Lyons never disappoints. She is a brilliant writer and storyteller both, which is not often found in an author.’ – BookingIt.net

‘CJ Lyons has done it again. This is the latest in the Lucy Guardino mysteries… and I have to say this is the most intense and action packed of all.’ – Carol Hoefs

‘One of the best books I have read in recent years.’ – Marilyn Hiliau

‘Another awesome read, very exciting and full of twists and turns. Keeps you on the edge of your seat from page one!’ – Sheila Faulk

‘Lyons has a fascinating premise: a city taken over by gangs and dope dealers--and she plays it out beautifully. The characters we're come to be intrigued by in previous work are back, but in unexpected ways. Just when I think I'm sure what one will do, he or she surprises me with a move I didn't see coming. Buy it! You won't be sorry.’ – Jerry Harber

As a pediatric ER doctor, New York Times and USA Today Bestseller CJ Lyons has lived the life she writes about in her cutting edge thrillers.

CJ has been called a "master within the genre" (Pittsburgh Magazine) and her work has been praised as "breathtakingly fast-paced" and "riveting" (Publishers Weekly) with "characters with beating hearts and three dimensions" (Newsday).

The Fallout from Shadows
Sandy Gent

The Body in the Mist
Nick Louth