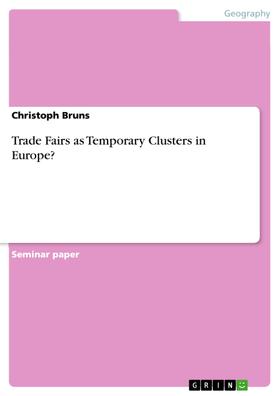 Seminar paper from the year 2011 in the subject Geography / Earth Science - Economic Geography, grade: 1,3, University of Cologne (Wirtschafts- und Sozialgeographisches Institut), course: The Economic Geography of the European Union, language: English, abstract: In our globalized world trade fairs are important events for firms to communicate and/or sell their products and services to a global audience. But besides this original aim of trade fairs, scientists go further and focus on the effects, which these temporary and spatial accumulations of professionals from the same or equal industries might have. According to that, a particular focus lies on inter-organizational learning processes, like they can be found in clusters. Thus, the central question of this report derives, whether in the European context trade fairs can be seen as temporary clusters, which would imply that trade fairs became central nodes connecting global economy.
This issue is important, since both participating in trade fairs and searching for adequate interaction partners are costly and time intensive processes. If trade fairs provided equal benefits as temporary clusters, organizing and participating entities would expend more effort on planning and conducting the time before, during and after the trade fair. Apparently, benefiting from new knowledge pools is at least an important aspect in times of increasing innovation velocity.
Finding a clear answer for the problem is not trivial, since the majority of available literature focuses on trade fairs in the context of a communication instrument in firm’s marketing mix. Furthermore there are difficulties to maintain a particular focus on Europe, since globalized world economy meets on international flagship trade fairs. Another aspect is the difficulty of measuring qualitative and quantifiable effects of spatial proximity in clusters, which additionally could be implemented to compare different forms of temporary clusters.