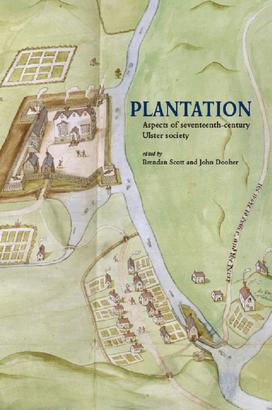 The plantation of Ulster in the early seventeenth century was an episode of critical importance in the history of Ireland, the legacy of which is still apparent today. Adopting a multidisciplinary approach, this collection of essays, arising from two conferences organised by the Ulster Local History Trust in 2008 and 2010, explores a number of themes relating to the plantation.

The essays in Plantation – Aspects of seventeenth-century Ulster Society, range from overviews to case studies of particular areas, individuals or groups. Sources that are essential to a better understanding of the immense social, economic, demographic and political changes brought about by the plantation are highlighted, while the experiences of the Irish, English and Scots are all brought into view and analysed from different perspectives. Edited by Brendan Scott and John Dooher expert contributors to the book include Dr Patrick Fitzgerald and Dr William Roulston

The conclusions in this important collection of essays challenge some preconceived notions and offer fresh thinking on aspects of this period. This accessible, scholarly and competitively priced collection does much to further our understanding of the Ulster Plantation.

Plantation - Aspects of seventeenth-century Ulster Society is edited by Brendan Scott and John Dooher and contains essays from a number of respected authorities on the Plantation of Ulster including Patrick Fitzgerald, William Roulston and Raymond Gillespie

The Role of Denomination in the Northern Ireland Conflict
Berina Hodzic

"Bloody Sunday" and its evaluation in the press
Stephanie Wenzl

Who Fears to Speak of '98
Peter Collins