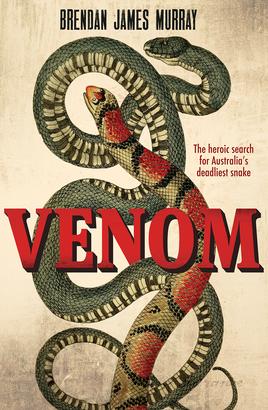 In the early years of the twentieth century an awareness was growing among European Australians of an unexpected threat, one that seemed the very embodiment of the dark, ominous power of the Australian bush.

To the Indigenous people of the Guugu Yimithirr nation, it was nguman; to the whites it was the taipan, an eight foot, lightning fast venomous snake whose bite meant certain death.

Venom is an examination of European settlers’ troubled and often antagonistic relationship with the land, seen through the lens of the desperate scramble for an antivenom, and highlighted by the story of George Rosendale, a taipan bite victim of the Guugu Yimithirr nation.

By one of Australia’s best and brightest young authors, this is a gripping tale of heroism and tragedy, offering the glimmering possibility of reconciliation.

Brendan James Murray lives with his partner, Greta, on Victoria’s Mornington Peninsula and teaches in a large government school. His first book The Drowned Man: A True Story of Life, Death and Murder on HMAS Australia has been shortlisted for the Ned Kelly Awards in the Best True Crime section.

It's All About Australia, Mate
Dennis Gregory

A Crying in the Wind
Elizabeth Fleetwood

Bread On the Table
Lena Elliott