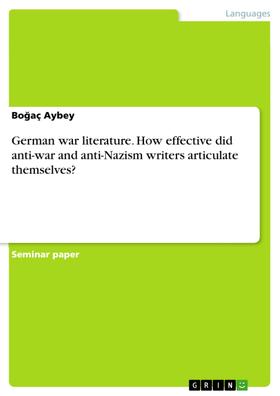 German war literature. How effective did anti-war and anti-Nazism writers articulate themselves?

Seminar paper from the year 2013 in the subject English - History of Literature, Eras, grade: 95, , language: English, abstract: A research paper on "How effective did anti-war and anti-Nazism writers articulate themselves?"

Historical time periods are in most cases themes of literature and inspire writers; to express their opinions; to reflect these periods ; and to enlighten people. So literature and history have been always grown together interdependently. Similarly, one of the most inspireful eras is time interval between World War I and II. As the narrator of Böll's satire, Christmas Not Just Once a Year writes, war had enormous effect on the writers of wartime:
During the years 1939 to 1945 there was a war on. In wartime there is a lot of singing, shooting, talking, fighting, starving and dying -- and bombs are dropped, all disagreeable things with which I have no intention of boring my contemporaries. I must merely mention them because the war had a bearing on the story I wish to tell (qtd. in Reid 2).

Almost every German artist wanted to articulate his/her view on war in different ways, but how exactly did they raise their voices? Nevertheless, their views of wartime differ. On the one hand, some authors wrote against either Nazi ideology or war; while on the other hand some writers wrote in favor of either Nazi regime or war. However, German writers against Hitler or war articulated themselves better, because even though it is prohibited to write against the government, they were courageous enough to criticize leaders and to discuss people's attitudes and point of views towards war, and the conditions of wartime.

Tall Talk: The Language of the Frontier
Katarzyna Paluba

Tense and Aspect in English and in German
Patricia Schneider