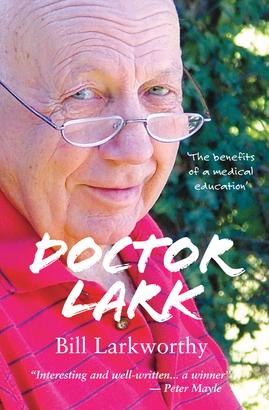 The Benefits of a Medical Education

Doctor Lark is Bill Larkworthy, a man with a sharp eye for the humorous side of the human condition. He has had two careers as a doctor, the first a twenty-year stint in the Royal Air Force, the second an equally adventurous and eventful time in Saudi Arabia and Dubai. In more than forty years and a variety of countries, he has treated the great and the good, the fit and the fat, heroes, villains and a fair assortment of life’s oddballs, many of whom enliven the pages of his memoir, Doctor Lark. Characters such as the gnome-like undertaker’s assistant in Belgium, the stoic Gurkhas in Malaysia, the retired RAF air vice-marshal who carried the Queen’s head in his stomach, ‘Betty Boobs’ who caused mayhem by jogging around the staff compound in Riyadh, the American doctor who enlisted Russian Mafia help to disappear in Moscow… Doctor Lark combines humour with astute observation and comment for an insider’s view of military, social and medical developments of the last half century.

A Lifetime in Longhaul
Bill Anderson