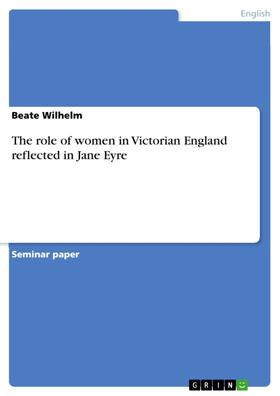 The role of women in Victorian England reflected in Jane Eyre

Seminar paper from the year 2005 in the subject English Language and Literature Studies - Literature, grade: 2,3, University of Freiburg (Englisches Seminar), course: Proseminar ‘The Brontës’, 11 entries in the bibliography, language: English, abstract: With Jane Eyre, Charlotte Brontë created a literary work that shook traditional conventions in Victorian England by showcasing the feminist view so clearly. It is a work that refutes denial and ignorance of women’s sexual identity and passion. Jane Eyre shows that women are capable of being passionate and of experiencing fulfillment in a marriage where the partners are equals.
In the following essay, I will explain the role and some major problems of middle–class women in 19th century Victorian England. Moreover, I will elaborate on how ‘the woman question’ (Martin, J. 1999:15) appeared and stress the fact that it brought about a complete and complex change in English society.
In chapter 1, the emphasis will lie on the historical background which shall serve as a basis for the following chapters where the main focus is made on the analysis of Charlotte Brontë’s text Jane Eyre.
I will illustrate that Jane Eyre is a woman who, resisting the limiting conventions of her time, reaches her goal – a life in fulfillment and bliss. It shall also be shown that Jane’s life is a symbolical “pilgrimage towards maturity and fulfillment” (Newman 1996: 475) starting in Gateshead and continuing with stops in Lowood, Thornfield and Moor House, before concluding in Ferndean.

Shakespeare's "Dark Lady"-sonnets: The hell of sexuality – the sexuality of hell
Eva Sammel