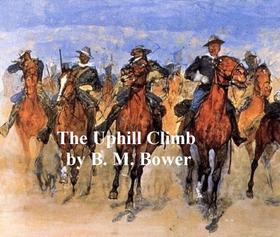 Classic western. " A story of a mountain ranch and of a man's hard fight on the uphill road to manliness." According to Wikipedia: "Bertha Muzzy Sinclair or Sinclair-Cowan, née Muzzy (November 15, 1871 – July 23, 1940), best known by her pseudonym B. M. Bower, was an American novelist who wrote fictional stories about the American Old West... She wrote 57 Western novels, several of which were turned into films."