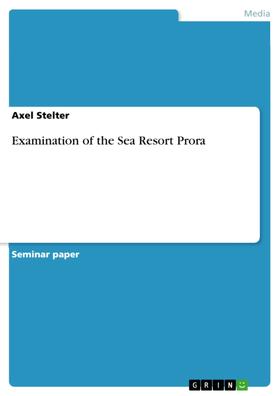 Examination of the Sea Resort Prora

Seminar paper from the year 2008 in the subject Art - Architecture / History of Construction, grade: 2,0, University of California, Berkeley , 8 entries in the bibliography, language: English, abstract: Germany’s biggest island Rügen offers beautiful landscapes with endless beaches and forests. Just north of Binz, a small resort town at the sea, the island narrows because of the dimensions of Jasmund Bay. Here, there used to be a long, isolated beach adjacent to a forest, which covered the area between the bay and the beach.
Nowadays, if you take a drive through the forest in order to find the beach, you will be surprised. Out of nowhere the forest darkens and a huge concrete wall arises and blocks your view as far as you can see.
The “KdF-Seebad der Zwanzigtausend”, or the “KdF sea resort of twenty thousand”, is located north of the town Binz on the island of Rügen. Based on Adolf Hitler’s idea, this sea resort building was built from May 1936 until the construction stopped at the beginning of the Second World War in 1939. The architect was Clemens Klotz.
After the 2nd World War, Russian and East German troops were stationed in the remains of this building and practiced tank maneuvers in the woods. But also the time of the Cold War went by and the troops moved out and left an empty building. Currently this building is part ruin and part money pit for the adjacent counties. A small youth hostel and a little, unimpressive museum about Nazi Prora are the only proof of life and occupy about 3 percent of the space of the original construction.
Prora can be seen as a monument now, a monument which demonstrates the definitions of National Socialist architecture, its unique characteristics and contradictions. It embodies the ideology of Nazi Germany from 1933-1945 in various themes.
In order to be more specific, it is essential to briefly observe Nazi architecture in its historical context, followed by a critical observation of the site of the Prora sea resort.

Content:
The Scale Issue of “The Colossus” 5
Style Issue 7
Prora and the people in the context of National Socialism 9
Conclusion 11
Appendices 12
Annotated Bibliography 19