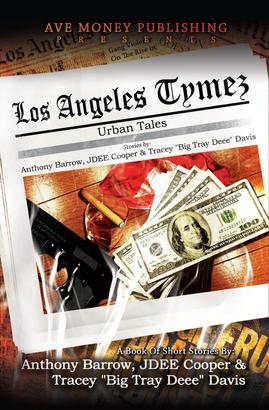 "UNFORESEEN", authored by Tracey "Big Tray Deee" Davis, displays a gripping tale which chronicles the "get money" attitude of exotic dancers, Erica, Shacoiya, and Hassani and the early hardships that forged their friendships. Things take a turn for the worse when they are lured by the ruthless Tasha Steele, a Federal ex-con, to work in her upscale gentleman’s club, "Four Play". Loot, lust, lesbianism, set-ups and wet-ups… This is where it all goes down!

"STREETZ GON′ CRY", authored by Anthony Barrow, exposes the unbridled hunger and conviction of "Carter", the young aspiring hustler chasing a street dream. With the respect and admiration, as well as his dedication to his mentor, Wolf, the sagacious and philosophical boss, was handed the keys to the game by his now deceased uncle, who was also Carter’s father. It also reveals his compassion and sense of commitment to his younger brother Johnté; the little brother Carter desperately tries to steer in a different direction other than the streets.

"NEVA SAW ME COMIN′", authored by DaSean "JDEE" Cooper, depicts the all or nothing mind state and activities of parolee "Crazy D", a reputable hood-star, hitting the bricks of Los Angeles after walking off a decade behind the pernicious walls of the California Department of Corrections. Before implementing his grand scheme, he first must get his baby’s momma, his ride-or-die chick and his down-ass homegirl to all fall in line with his program; as he cleans up his backyard, due to a major violation of trust and principle.

So You Wanna Be A Rapper
Mark Skillz