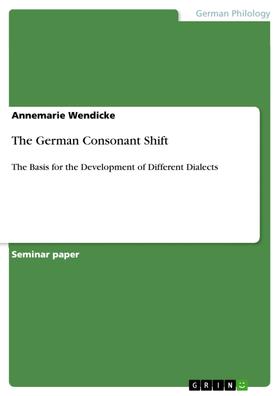 The Basis for the Development of Different Dialects

Seminar paper from the year 2008 in the subject German Studies - Linguistics, grade: B+, Hawai'i Pacific University, language: English, abstract: The English language as well as the German language belongs to the Germanic branch of the Indo-European language family, which includes most of the languages spoken in Europe. All languages go through a process of change as human beings do the same. It happens very often that they are the reason for a change such as the introduction of spelling and pronunciation rules. Some languages are only affected by minor sound changes but the major sound changes affect all languages as it affects the people, who speak this language. For instance, although the German language was also affected by Grimm’s Law as it is the most famous sound law in the history of linguistics, they reason why the German language, especially High German, differs so much from Low German and other Indo-European languages is the High German consonant shift or what it is called in German “zweite Lautverschiebung.” Consequently, the High German consonant shift is responsible for the development of the different dialects in the German-speaking nations.

Migration Hump and Development. A Look at Migration Patterns in Turkey and Mexico
Arshi Aggarwal