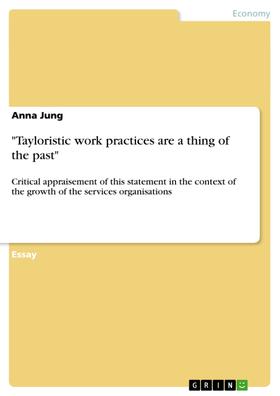 "Tayloristic work practices are a thing of the past"

Beschreibung zu „"Tayloristic work practices are a thing of the past"“

Essay from the year 2013 in the subject Business economics - Economic and Social History, grade: 84, University of Hertfordshire, course: Organisational Behaviour. Theory and Practice, language: English, abstract: In today’s competitive environment improving efficiency and elevating organisational
performance is critically important to remain competitive in the global marketplace. In
the late nineteenth century Frederick W. Taylor developed one of the earliest
conceptions of management in order to maximise firm productivity. He argued that
performance can only be improved by the application of scientific practices and
established his ‘principles of scientific management’ (Taylor, 1998). However, due to
the Human Relations movement in the 1930s which emphasised the impact of the social
context of the workplace on firm productivity, Taylor’s theory of ‘scientific
management’ became obsolete (Legge, 2005; Thompson & McHugh, 2009).
Conversely, many researchers believe that Taylorism is revived and argue that
Tayloristic ideologies are still dominant in workplaces today (Bain et al., 2002; Bell &
Martin, 2012; Braverman, 1998). More importantly, the continuing relevance of
Tayloristic methods in organising work is no longer restricted to the traditional
manufacturing industry, but can also be found to a greater degree in the rapidly growing
service industry (Braverman, 1998; Crowley et al., 2010). In this context, most notably
the nature of work processes in telephone call centres (Taylor et al., 2002; Zapf et al.,
2003) and the fast food industry (Ritzer, 1996 & 1998) has aroused a great deal of
attention. For instance, a BBC News article raises the question “Are call centres the
factories of the 21st Century?” (Hudson, 2011) and thus underpins the controversial
debate about the working conditions in call centres. Accordingly, it is worthwhile to
scrutinise this argument in more detail. With that said, the objective of this essay is to
critically appraise the statement ‘Tayloristic work practices are a thing of the past” in
the context of the growth of the services organisations. First, in order to set the scene for
the examination of this proposition, the concept of ‘Taylorism’ will be outlined. After
that, by means of primarily call centre organisations, and fast food restaurants,
occurrence of Tayloristic work practices in the service sector will be investigated.
Finally, based on these expositions, the main findings will be summarised and
evaluated. [...]

An Investigation of Aggression and Bullying in the Workplace
Erica Thompson