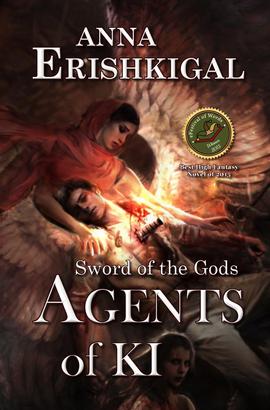 Sword of the Gods III: Agents of Ki

Beschreibung zu „Sword of the Gods III: Agents of Ki“

At the dawn of time, two ancient adversaries battled for control of Earth. One man rose to stand at humanity's side. A soldier whose name we still remember today…
Cut down by an act of betrayal, Mikhail lingers between life and death while his fragile alliance crumbles against the onslaught of a Sata'anic invasion. Fearful the intrepid Angelic might lose hope and die, his young protégé concocts a plan to fool him into thinking his wife is at his side. Meanwhile, held captive by the Evil One, Ninsianna must choose between loyalty to her fallen husband and manipulating the Evil One's minions to turn against him.
As darkness tears the heavens asunder, a tiny Mesopotamian village finds itself the epicenter of a war between good and evil. But all is not lost. An ancient goddess has recruited two 'Watchmen' to turn darkness back into the light; mortal creatures who do not realize they are pawns in an eternal war.
The saga of the greatest superhero to ever walk the Earth continues in Agents of Ki…
This book is NOT religious fiction!
*
Sword of the Gods saga reading order:
The Chosen One Omnibus (includes:)
—Heroes of Old: Episode 1x01
—Sword of the Gods
—No Place for Fallen Angels
—Forbidden Fruit
Prince of Tyre
Agents of Ki
The Dark Lord's Vessel
The Fairy General (coming soon)
.
Children of the Fallen series
(set in the same universe, but in the modern day)
Angel of Death Omnibus (includes)
—Angel of Death
—Angel of Death: A Love Story
A Gothic Christmas Angel (A Children of the Fallen novella)