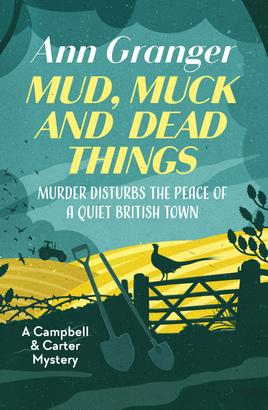 The first thrilling instalment of the Campbell and Carter mysteries.

When the body of a young woman is discovered in the cowshed of Cricket Farm, the tranquility of the British countryside is shattered. Inspector Jess Campbell is on the case, but with few leads, a grumbling partner, and the new superintendent Ian Carter piling on the pressure, she’s beginning to wonder why she chose to be a detective in the first place.

The shifty land-owner Eli Smith seems to have something to hide, and as Campbell delves into the gruesome past of the dilapidated farm, the mystery deepens. A flashy Mercedes spotted fleeing the scene of the crime leads to a suspect, but when another body turns up, it looks as though Campbell’s lead is nothing but a dead end…

Book one in the Campbell and Carter Mysteries, Mud, Muck and Dead Things will thrill fans of M. C. Beaton, Joy Ellis and the Midsomer Murders.

'Characterisation, as ever with Granger, is sharp and astringent' The Times

Ann Granger is a British author of cozy crime. Born in Portsmouth, England, she went on to study at the University of London. She has written over thirty murder mysteries, including the Mitchell & Markby Mysteries, the Fran Varady Mysteries, the Lizzie Martin Mysteries and the Campbell and Carter Mysteries. Her books are set in Britain, and feature female detectives, murderous twists and characters full of humor and color.

Dead in the Water
Ann Granger

Dead in the Water
Matthew Costello