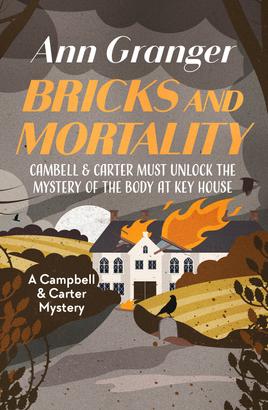 Can Campbell and Carter unlock the mystery of the Key House murder?

A body is discovered inside of the smouldering ruins of Key House. The crumbling Cotswold manor has long been empty, but rumor has it that the owner, Gervase Crown, was seen lurking around just before the fire.

Inspector Jess Campbell and Superintendent Ian Carter pin Gervase as a prime suspect, but was he the murderer, or the target? It seems that his sudden reappearance has stirred up animosity long thought forgotten.
Bricks and Mortality is the third instalment to the Campbell and Carter Mysteries, ideal for fans of Midsomer Murders, T. E. Kinsey and Faith Martin.

'Entertaining and lifelike characters. And there is a satisfying and unexpected twist on the last page' Mystery People

'The characters...are drawn with a telling eye for their human foibles and frailties. Granger is bang up to date' Oxford Times

'Characterisation, as ever with Granger, is sharp and astringent' The Times

Ann Granger is a British author of cozy crime. Born in Portsmouth, England, she went on to study at the University of London. She has written over thirty murder mysteries, including the Mitchell & Markby Mysteries, the Fran Varady Mysteries, the Lizzie Martin Mysteries and the Campbell and Carter Mysteries. Her books are set in Britain, and feature female detectives, murderous twists and characters full of humor and color.