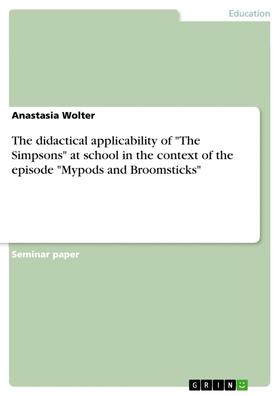 Seminar paper from the year 2011 in the subject English - Pedagogy, Didactics, Literature Studies, grade: 2,3, Justus-Liebig-University Giessen (Anglistik), course: Teaching English as a Foreign Language, language: English, abstract: With the Simpsons' episode "Mypods and Broomsticks" one can show the students how people, including themselves, are influenced by media and what they see on television and how the episodes of The Simpsons contain actual political or cultural topics. Apart from that media plays such an important role in school because students have to be taught how to work with media and technology (containing television and serials).
First of all the work will discuss the importance of animated films and serials and how media is influencing the perception of the world. Because of this and its expanding area of influence on the children, it is important to consider media in school and to work with it, so that the students are familiar with media.
The episode “Mypods and Boomsticks” will be analyzed and its importance for the perception of the Americans and their way of life will be shown. It contains many intertextual hints and stereotypes and is a good example of how the Americans see themselves and their culture and compare it to cultures from people of a foreign country.