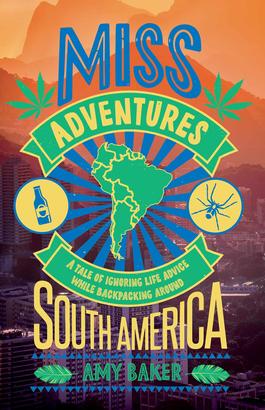 A Tale of Ignoring Life Advice While Backpacking Around South America

‘Watch out for men with too much wooden jewellery, Amy. I know what you’re like… you’ll let them sucker you in with their yoga chat but essentially, they’re unwashed… and you don’t want to put your face anywhere near an unwashed penis, let me tell you.’

Having announced her plans to quit her job and backpack around South America, humourist and gonzo journalist Amy Baker found herself on the receiving end of a whole bunch of over-the-top and seemingly unnecessary advice. Amy shrugged it all off of course... that is, until she ran into trouble.

After falling into a crevasse, swimming in crocodile-infested waters, dodging cocaine con artists and encountering handsome soothsayers, Amy soon starts to wonder if her Mum, boss and Carol from reception really were onto something. Weighing up their advice against that of known ‘Clever People’ like Tina Fey, Salvador Dalí and Mother Teresa, Amy establishes once and for all who it might actually pay to listen to.

No, That's Not in the Bible
David Dykes

There and Back Again
Timothy Imhoff