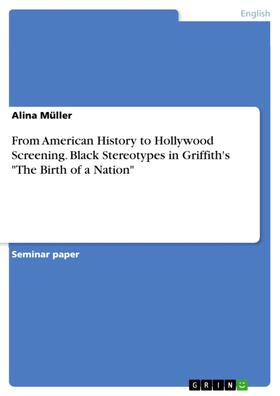 From American History to Hollywood Screening. Black Stereotypes in Griffith's "The Birth of a Nation"

Beschreibung zu „From American History to Hollywood Screening. Black Stereotypes in Griffith's "The Birth of a Nation"“

Seminar paper from the year 2014 in the subject American Studies - Miscellaneous, grade: 2,0, Johannes Gutenberg University Mainz, language: English, abstract: The spectacular but controversial film "The Birth of a Nation", written in 1915 and directed by a white supremacist D.W. Griffith, was “hailed as a picture without peer” and praised for being one of the most successful silent films by the audience of its time (Rylance 1). At the same time, however, it became the subject of a great dispute over its racial politics. Griffith, for example, partly denies critiques of racial implications in his film. Using black stereotypes in the Birth, his main purpose was to depict the historical reality of the American past. His aim was revealed in the following statement from the film: “This is an historical presentation of the Civil War and Reconstruction Period, and is not meant to reflect on any race or people today” (1:28:13). Referring to the Jim Crow period, when blacks were subordinated and exploited, Griffith intended “partly to show the undeserved and unearned prosperity of blacks during Reconstruction” (Wallace 87). In other words, Griffith’s purpose was to emphasize the supremacy and restored rule of the whites in the antebellum South.
This paper analyzes the black stereotypes in The Birth of a Nation. In particular, it is concerned with the characters played in blackface such as the Uncle Tom, the Mammy, the Jezebel (Lydia Brown) and the Brutal Black Buck (Sylas Lynch). It will examine how these character types fit to the black stereotypes which existed since slavery and became popular in American life. Through an analysis of the characters, this paper will also reveal Griffith’s position toward racial justice and American identity.

Ähnliche Titel wie „From American History to Hollywood Screening. Black Stereotypes in Griffith's "The Birth of a Nation"“

"The Game the Same. Just Got More Fierce."
Eike Rüdebusch

On The Far Bank Of The River
Markus Wegner