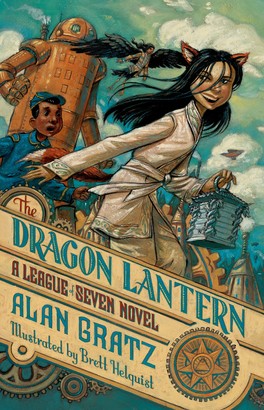 A League of Seven Novel

The Dragon Lantern is the second action-packed, steampunk adventure in the League of Seven series by the acclaimed author of Samurai Shortstop, Alan Gratz.

Archie Dent is convinced that he and his friends Hachi and Fergus are the first three members of a new League of Seven: a group of heroes who come together to fight the Mangleborn whenever the monsters arise to destroy humanity. His belief is put to the test when they are forced to undertake separate missions. Archie and his faithful Tik-Tok servant Mr. Rivets pursue a shapeshifting girl who has stolen the Dragon Lantern, an ancient artifact with mysterious powers. And Hachi and Fergus travel to New Orleans to find Madame Blavatsky, the only person who knows the circumstances surrounding the death of Hachi's father.

In the course of their adventures the three heroes meet potential candidates to join their League. At the same time, they learn deep-rooted secrets that could destroy the League forever….

ALAN GRATZ was born in Knoxville, Tennessee. After graduating from the University of Tennessee, he began a succession of jobs—newsletter writer, high school teacher, university lecturer, bookseller, radio commercial writer, advertising copy writer, middle school teacher, library shelver—all the while working on various writing projects. In 2006, he published his first novel, Samurai Shortstop, an ALA 2007 Top Ten Book for Young Adults. Alan’s award-winning books include The Brooklyn Nine, Fantasy Baseball, Starfleet Academy: The Assassination Game, Prisoner B-3087, and The League of Seven, the first in a series of alternate history middle grade fantasy novels. When he’s not writing, he’s usually reading other people’s books or creating an awesome new costume for science fiction/fantasy conventions. He lives with his family in North Carolina.

The League of Seven
Alan Gratz

Tut: The Story of My Immortal Life
P. J. Hoover