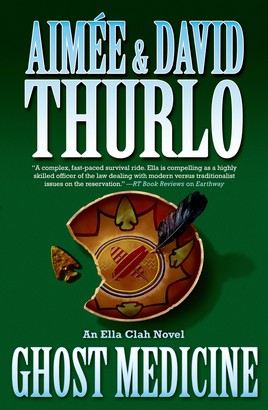 Ella takes all her cases personally, but some cases are more personal than others. The murder of Harry Ute is one of those—not only because Ella and Harry dated, years ago, but because Harry was once a member of her investigative team. Ella's team is as close to her as family and a blow against one is a blow against all.

Harry's been working for Bruce "Teeny" Little, a local security expert, but despite their long friendship, Teeny won't tell Ella much, just the job involves theft of government property. The dead man was found in an isolated area of the Rez that is reportedly haunted by skinwalkers and the scattered residents are too frightened of the Navajo witches to tell the police much.

County cop Dan Nez is also looking into the government thefts. The two detectives—each top dog in their own territory—will have to share jurisdiction, something complicated by their growing attraction to each other.

Ella finds evidence that connects Harry's murder to the secret sale of previously unknown Navajo artifacts. If Harry discovered a hidden—and illegal—dig, the artifact smugglers might have killed him to protect their lucrative operation.

Identifying the murderer isn't going to be easy. But Harry was one of her own and Ella is determined to bring his killer to justice.

Aimée Thurlo is co-author of the Ella Clah series, the Lee Nez series of Navajo vampire mysteries, and the Sister Agatha novels. Her other works, co-written with her husband, David, include Plant Them Deep, a novel featuring Rose Destea, the mother of Ella Clah, and The Spirit Line, a young adult novel. Aimée, a native of Cuba, lived in the US for many years. She died in 2014.