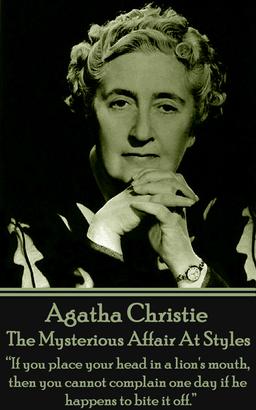 The Mysterious Affair At Styles

"If you place your head in a lion's mouth, then you cannot complain one day if he happens to bite it off.£

Agatha Mary Clarissa Miller was born on 15 September 1890 in Torquay, Devon, South West England into a comfortably well off middle class family to an American father and storyteller mother with two older siblings. Agatha was home schooled by her father and although her mother didn’t want her to learn to read until she was 8, Agatha taught herself by the age of 5. By 18 she was writing stories which were published in the 1930s, albeit heavily revised. Although she met her first husband, aviator Archie Christie in 1912 and married him in 1914, the war meant they met infrequently and in her autobiography she states that married life didn’t really begin until 1918. In 1920 she wrote her first novel, The Mysterious Affair at Styles which introduced the character of detective Hercule Poirot. He was to feature in 33 of her novels and 54 short stories. The Guinness Book of Records cites Christie as the world’s best selling novelist with her novels selling approx 4 billion copies and translated into over 103 languages, making her also the most translated author. Nicknamed the Queen of Crime or Mystery and master of the classic mystery structure, she had an incredible talent for plotting, characterisation and suspense which came very naturally to her : ”I may spend three weeks to nine months in thinking up a plot - the actual time of writing and typing it would be approximately three months”. Agatha Christie died on 12 January 1976 at the age of 85 from natural causes at her Winterbrook House near Wallingford in Oxfordshire and buried in the nearby churchyard of St Mary's, Cholsey.

Some Tales In Verse
R.D. Blackmore

Wounds In The Rain
Stephen Crane

What You Want & Other Stories
O Henry