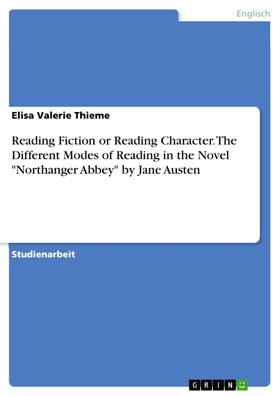 Reading Fiction or Reading Character. The Different Modes of Reading in the Novel "Northanger Abbey" by Jane Austen

Buchbeschreibung zu „Reading Fiction or Reading Character. The Different Modes of Reading in the Novel "Northanger Abbey" by Jane Austen“

Studienarbeit aus dem Jahr 2014 im Fachbereich Anglistik - Literatur, Note: 1,3, Johannes Gutenberg-Universität Mainz (Department of English and Linguistics), Veranstaltung: Exam Preparation, Sprache: Deutsch, Abstract: Northanger Abbey was drafted in 1794, completed nine years later and finally published posthumously in 1818. It was “[w]ritten in response to contemporary fiction” and Austen herself defended her “outdated” dealings with Gothic fiction in an advertisement she had composed earlier, stating that “since it [the novel] was finished (...) period, places, manners, books, and opinions have undergone considerable changes”. Since there is a plethora of essays, papers, and novels concerned with the questions of intertextuality (Austen’s “response”) within Northanger Abbey and the question of genre (parody, pastiche, didactic novel, romance,…) has been dealt with already, this paper will concentrate on the different modes of reading discussed in the novel instead.

A focus of Northanger Abbey is the depiction of how the choice of literature shapes a character’s perception of reality and other persons. It seems logical that in “a novel about literature, the reader might expect that the literary works featured have more than an incidental importance [and in] this self-consciously literary book many of the major characters are readers”.

Therefore, in addition to a close analysis of the protagonist Catherine Morland’s (in-)capability to cope with fiction and people, this paper is concerned with four other characters, namely Isabella and John Thorpe as well as Henry and Eleanor Tilney and their reading techniques. The choice of characters to be analysed is based on Northanger Abbey’s dichotomising structure, which provides “a playground for polarities”. These polarities include the two main settings (Bath and Northanger Abbey), the novel’s parody elements (which are a binary phenomenon as well), and, of course, the character constellations.

Catherine Morland is torn between the Thorpe-siblings, on the one side, and Henry and Eleanor Tilney, who are also brother and sister, on the other side. In accordance with the strict binary plot structure, the “two men in Catherine’s life (...) are clearly contrasted, as are her two female friends”. The opposites include conduct as well as literary tastes. Since the ability to read others opens the opportunity to manipulation, there will be a chapter on this topic as well.

The Keys Of Love
Barbara Cartland

A Sacrifice for Love
Barbara Cartland