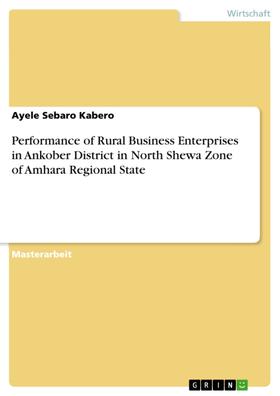 Masterarbeit aus dem Jahr 2017 im Fachbereich VWL - Konjunktur und Wachstum, Mek'ele University, Sprache: Deutsch, Abstract: This study was conducted to investigate the performance of rural business enterprises in terms of improving socioeconomic condition of rural people and contributing for improved rural-urban linkages in Ethiopia. It was carried out in Ankober district to contribute towards filling the gap on the knowledge and understanding about the performance of rural business enterprises in Ethiopia.

The study used 105 rural businesses selected using simple random sampling proportional to size. It also used 4 Focus Group Discussions and 5 Key Informant Interviews; purposely selected based on their knowledge and experience in rural business. The data was analyzed using descriptive statistics. The result indicates that ownership of rural business enterprises is dominated by male headed households (79% male) which imply that women face more limitations to engage in formal businesses due to limited access to capital among others. The finding also indicated owning rural business enterprise significantly contributed for the socioeconomic improvement of the business owners. The annual income of the enterprise owners is 1.94USD per person per day, which is significantly greater than rural households’ income in Ethiopia, which is 0.8 USD. Rural businesses are main source of income for 85.7% of enterprise owners. But the income is season sensitive and depends on agricultural performance. Annual non-food expenditure of the enterprise owners is 186.83 USD in 2013/2014 and 177.1 USD in 2015/2016, which is higher than the national average; 112.66 USD.

The Most Dangerous Thing
Leanne Lieberman

Close to the Heel
Norah McClintock